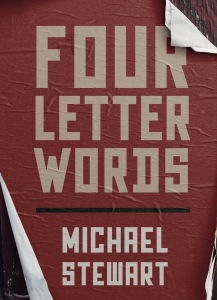 A book in two halves:

Work explores what paid employment is for many people now: deadening, grinding and underpaid. A barmaid who has to put up with being sexually abused as part of her job, a sex worker who finds out just how far she will go to raise the money she needs to see her son, a painter and decorator who only sees white, a beggar who goes too far, and an office worker who discovers his boss has a skeleton in his closet.

Home explores dysfunctional domestic settings. A single mum who has to hand over her child to a violent ex-boyfriend, a woman driven through loneliness to form a relationship with her vacuum cleaner, and an unusual coupling between an advertising exec and a homeless girl. For some home offers little respite from the toil and tyranny of work.

Stylish and unsettling with a seam of black comedy running throughout the collection, Four Letter Words is a baker’s dozen of modern urban noir that offers responses to a number of contemporary concerns such as homelessness, addiction and sexual exploitation.

Watch ‘A Black Sheep in the White Swan’ film here