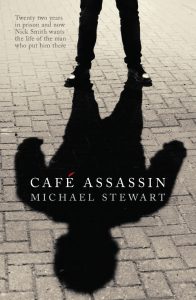 Nick Smith went to prison for a crime he didn’t commit. Now, after twenty-two years inside, he is looking for the man who put him there. They were once best friends and while Nick was incarcerated Andrew did very well, very well indeed. Andrew is a QC and he has it all: the big house, the cars, a beautiful wife and a family. Nick wants everything Andrew has. He wants it all and he will do anything to get it.

Hear an extended interview with Mike including discussion of Cafe Assassin here.

‘A needle-sharp portrait of a man bent on revenge…you can smell the Northern streets in this second novel. It oozes authenticity and atmosphere.’ (Geoffrey Wansell)

‘…it’s a goody; a dark tale of intense friendship outlining betrayal and jealousy…’

‘Think of Whatever happened to the Likely Lads with drugs, murder, sex and yearning; think Stephen King’s Stand by me, and you have an idea of this book.’